dehydrated media has been weighed out 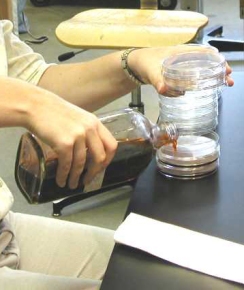 sterilized media is being poured into sterile petri dishes

The chance observation in 1881 of bacteria growing on the surface of a spoiling slice of boiled potato led Robert Koch to devise the technique called single colony isolation. He correctly deduced that each spot, or colony, of bacteria had grown as
a clone from a single contaminating bacterium. He subsequently developed the use of agar, a polysaccharide derived from certain red algae, to solidify nutrient liquid media. This allowed a specimen to be spread across the surface of the medium and grown to produce single colonies, thus isolating the various microorganisms which might be present. The power and elegance of this technique will be explored in later exercises.

Agar is particularly suited as a solidifying agent because it will not melt until the medium is heated to near boiling(95°C-100°C), but will remain melted until cooled to around 42°C. It is not degraded by the vast majority of bacteria, and therefore maintains its structure during bacterial growth, and because it is not a nutrient for bacteria, it also allows strict
control of growth factors.

There is a wide variety of media which are used in microbiology, but the procedures used in their preparation are generally the same. They include weighing out the dehydrated media, dissolving it in dH2O, sterilizing it (usually by autoclaving), pouring the plates, preincubation to check for contamination and to dry out the plates, and storage.

Because medium boils up during decompression from autoclaving, we will autoclave only 600 mL of medium in a 1 liter bottle. You will need to calculate the amount of powder needed per 600 mL of medium since the directions on reagent bottles are for 1 full liter. Teams of 3-4 students will prepare a media assigned to them. [Have media in autoclave within 75 minutes of start of class in order to have plates poured by the end of a three hour lecture/lab.]

WEIGH OUT THE DRY MEDIA: 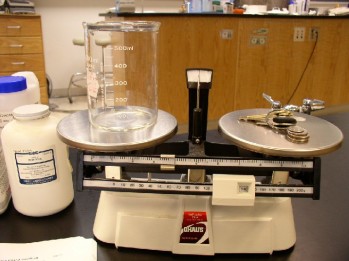 1. Tare out the 1000 mL beaker, use counterweights if necessary, record tare weight. 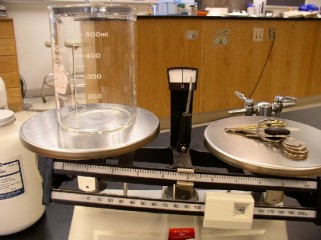 2. Sum the desired mass of the dehydrated medium + tare weight, set balance to read the sum.

3. Add dry reagent with care to beaker with a clean spatula. After each addition, gently tap the edge of beaker with spatula to judge progress. When close to the desired weight, tilt and roll the reagent bottle, tap its neck to sprinkle in the final amount until equal swings are achieved. Do not remove any excess back to the reagent bottle. Replace the cover immediately on the reagent bottle (it is hygroscopic). Record the actual amount added.

4. If there are more than a single substance in your medium, repeat steps 2 & 3 for other dry materials. (Use each new apparent weight as the new tare, repeat the sequence of steps.)
Check again to be sure all reagent are securely capped. 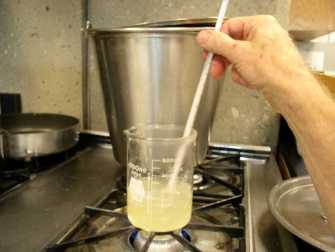 6. Stirring with a thermometer, heat to boiling: do not allow to boil over, nor to burn on bottom. Have hot pads available. (Microwave in cycles of heating and stirring, do not boil over.)

8. Pour into a 1000 mL bottle with a funnel. Cap loosely, label bottle with name of medium and your group’s name, place in autoclave.

AUTOCLAVE: (After all student groups have placed their loosely capped bottles in autoclave) 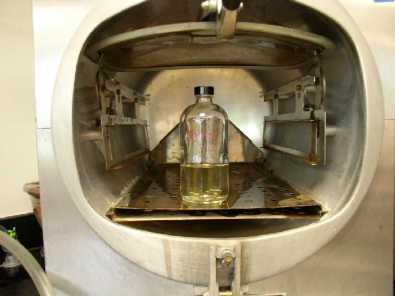 This is a close up of the gauge cluster during autoclaving 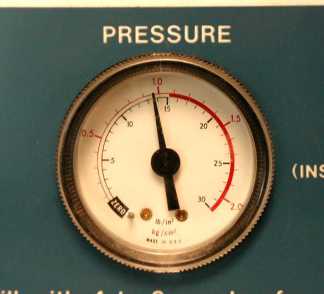 10. Set for slow exhaust, autoclave the medium at 15 lbs. pressure for 15 minutes (for most media). This takes at least 45 minutes. 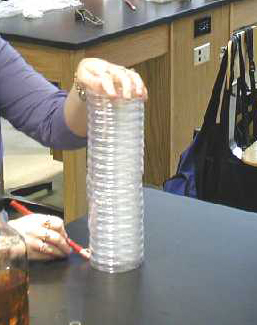 13. Mark the sides of the dishes according to code lines to indicate the type of media they contain (or label the petri dishes on bottom in small letters: plate type, date.) 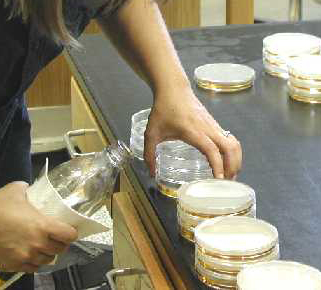 14. On a sterile field, each student pours at least four plates using sterile technique as demonstrated. (Position stacks of four or five sterile plates near edge of desk, remove and hold cap with little finger, flame lip of bottle, fill bottom plate first, at least half full, repeat, holding lid over plate as you pour.)

15. Flame the lip of the bottle whenever the lid is replaced. The last student pours all of the rest of the medium. 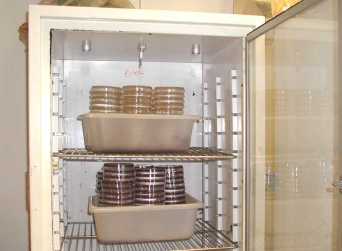 17. When plates have solidified, invert, place in 37°C incubator for 48 hours to check for sterility and to dry out excess moisture. Store in labeled plastic bag at 4C°. Pre-warm before using

*The cooling process may be hastened by placing in front of fan, or immersion of the hot bottles of medium into a bucket of
50°C water. (Colder water may cause the bottles to break…) 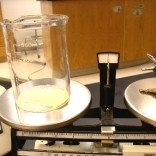 front view of the autoclave

Be sure to push the weights all the way to the right before you return the balance to storage. 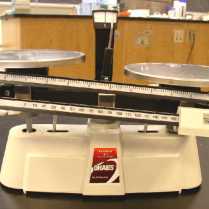 Taring out a plastic beaker:

front view of the autoclave

This is a close up of the gauge cluster during autoclaving

Pasteur showed that once a medium is sterilized, it will remain sterile until contaminated by microorganisms (i.e., they do not appear by spontaneous generation.). Heating is one of the most convenient methods for sterilization. Simple boiling at 100°C, however, is not completely effective for sterilization because many spores can survive this temperature. However, the boiling point of water goes up when exposed to increased pressures. In a pressure cooker where the pressure is 15 pounds/sq inch (1 atmosphere) above standard pressure (760 mm Hg), water boils at 121°C. This temperature kills all life forms in 15 minutes or less. These conditions have become the standard for sterilizing apparatus or small volumes of liquid: i.e., treat over boiling water at 15 pounds pressure for 15 minutes (commonly called “15 pounds for 15 minutes”).

An autoclave is a piece of laboratory apparatus which acts as an automated pressure cooker. The conditions inside are thermostatically controlled so that heat is applied until 121C is achieved, at which time the timer starts, and the temperature is maintained for the selected time.  Here is the cluster of dials and gauges which regulate its use: 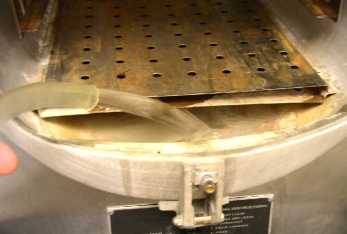 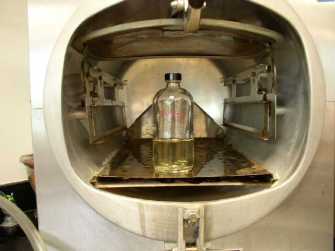 Load material to be autoclaved, following the appropriate protocol for type of material being sterilized. 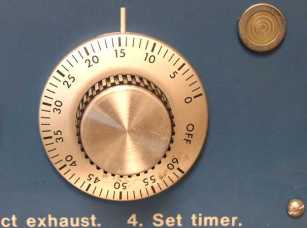 Select the time of treatment (15 minutes for small volumes. For containers containing volumes over 1 liter: 30 minutes, over a gallon: 60 minutes.) This begins the cycle.

When the pressure is 1 atmosphere (15 pounds) and the temperature is 121 C, the timer begins to time the process. (Yes, these numbers were not quite acheived when the pictures were taken…)

After sterilization, when pressure has returned to zero, open up the door with care–the steam will burn your hands or wrists if they are above the door. Remove hot items with the aid of gloves, pour out any melted contaminated agar immediately and rinse glassware in hot water.

Open drain valve to empty water in bottom of autoclave (make sure drain is in proper position).

**Use the following procedure for autoclaving the listed class of materials
liquids in bottles: 3/4ths filled, caps on slightly loosened.
clean petri dishes: top side up, in can if desired.
apparatus: wrap in brown paper, fold over edges, staple to hold.
contaminated petri dishes: agar side down, in pan if plastic.

Do not load tall bottles near the front of the autoclave, the door hits them.