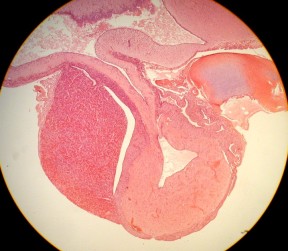 Islets of Langerhans in pancreas, 100x

Examine each of the following slides, note the features in common and those which differentiate the endocrine organs.
Make five illustrations, each at the noted power to take up at least half of a page. Note the purposes of each of the functional features labeled. Compare with the illustrations in di Fiore’s Atlas of Normal Human Histology, 9th Ed. Read di Fiore’s discussion of the endocrine system, pp 266-267 for a discussion of functions. 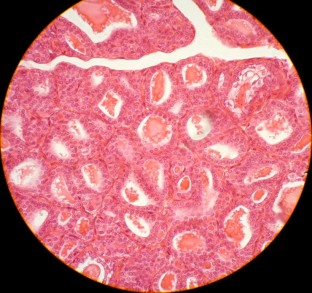 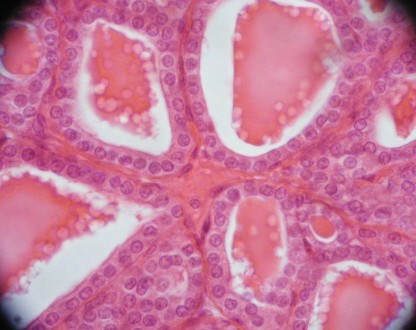 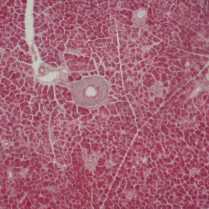 Islets of Langerhans in pancreas, 100x

ovaries and uterine horns in the cat

This lab uses a cat which has been opened from stem to stern on the ventral surface as directed in the protocol Nerves to Locate in the Cat. You will need to know italicized features in order to locate the listed endocrine organs in bold. The page references to the illustrations in Gilbert’s Pictorial Anatomy of the Cat are given in parentheses. Illustrate a small view of the brain and a large view of the neck and trunk showing all bold and italicized features. At home, list the hormones produced and describe their functions for each endocrine organ named. Here is the page discussing the histology of endocrine organs .

I. HEAD: If you did not dissect your cat’s cranium, find a student who did.

PITUITARY: Find the sella turcica on the floor of the cranium where the pituitary was once located. Probably part of it remains (p. 39 & 83). The ring shaped structure is its infundibulum.
In this dissection, the pituitary remains attached to the brain just behind the optic chiasma and in front of the maxillary bodies.

PINEAL GLAND: The pineal gland can be seen just superior to the corpora quadrigemina on the rear medial surface of the brain. (p. 78)
It produces melatonin except when light strikes the retinas.
Here is an image from when we removed the brain showing the labeled pineal gland.

II. NECK Here is a labeled view of the endocrine organs of the neck and thorax (and nearby organs for reference). 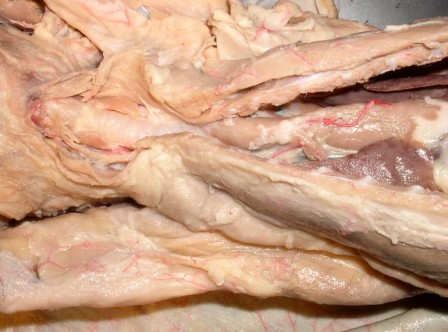 THYROID: Two globular organs inferior to the larynx and adhering lateral to the trachea are the two lobes of the thyroid glands. (p.47) (In the human they are joined by a prominent isthmus.)
Thyroxine is produces in the follicles and calcitonin produced in the parafollicular cells.

PARATHYROID Attached to the thyroid on its dorsal side are the parathyroid glands, which are tiny and nearly invisible.
Note that they are presumed there, even though not seen. It produces parathormone. 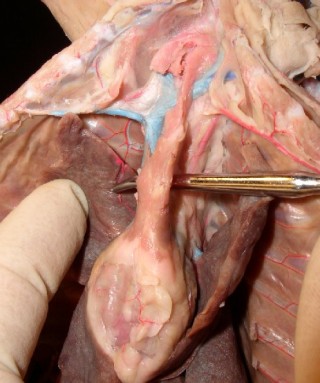 THYMUS: In the mediastinum, the thymusis ventral to the trachea, superior to the heart. (p. 42)
It is the site of maturation of immune “T cells” of which there are several types including T-helper, T-killer, and T-suppressor cells. It is only found in young animals whose immune system is still maturing.

Reflect the two abdominal wall flaps to expose the abdominal organs. Here is a labeled view of the undissected abdominal contents. 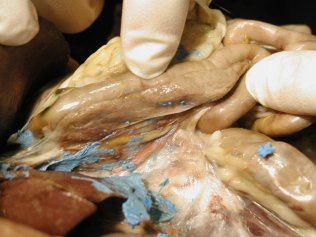 STOMACH: The stomach lies under the liver to the left. It secretes gastrin which triggers gastric secretions.
DUODENUM: The duodenum is immediately distal to the stomach, and secretes secretin which triggers pancreatic secretions, and cholecystokinin which among other actions, triggers contraction of the gall bladder.
PANCREAS: The pancreas is nestled along the inside curve of the duodenum (just downstream from the stomach), and appears diffuse and slightly fatty. (p. 43-50) The green stain on the duodenum shows where the bile duct enters the small intestine. The pancreatic duct enters here too.
The islets of Langerhans are distributed throughout the pancreas and synthesize insulin and glucagon.
Here is a labeled view of the GI tract endocrine organs. 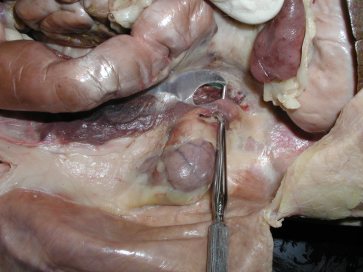 KIDNEYS: Gently move the intestines one side so that you can see the kidneys at the rear of the abdominal cavity.

Here is a labeled view of the kidney, adrenal gland, and nearby organs of the rear abdomen.
It synthesizes renin in response to low blood pressure. This initiates the ‘renin-angiotensin’ pathway which ultimately triggers mineralcorticoid (aldosterone) synthesis in the adrenal cortex.

ADRENALS: The adrenals are globular organs superior to the kidneys, under the prominent adrenolumbar vein. Both are retroperitoneal. (p. 55) (In humans, they rest on the kidneys, but not in the cat.)
The adrenal cortex makes three classes of steroid hormones: mineralcorticoids (raise blood sodium), glucocorticoids (raise blood glucose) and androgens (trigger masculation).
The adrenal medulla releases adrenaline which stimulated by the sympathetic nervous system. 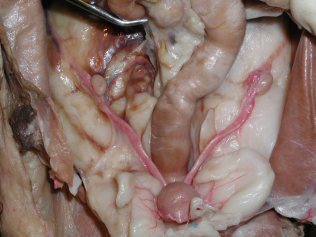 TESTES: If you have a male cat, the testes can be felt in the scrotum. (p. 56) Find the spermatic cord which runs infront of the pubic bone carying the testicular veins which carry blood-borne testosterone. towards the heart where enters the abdomen (look for the vas deferens looping over the ureters at the bladder). Inspect a cat of the opposite sex of the one you are using so you see both sets of gonads.
Here is a labeled view of the testis and spermatic cord.
The cells of Leidig in the testes synthesize the steroid testosterone.

CLOSING UP: When you have finished your dissection, reposition the internal organs in their proper locations, close the abdominal flaps, wrap in the skin, place in the plastic bag, press out the air, seal with 2-3 turns of a rubber band and return to the box, numbers to the right. Wash your desk top with warm slightly soapy water. Wash your instruments well, dry them, replace in storage. Check the sinks and the floor around your desk to be sure they are thoroughly clean.