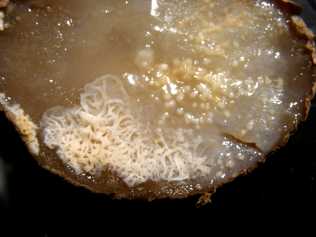 Bacteria from a finger growing on potato slice 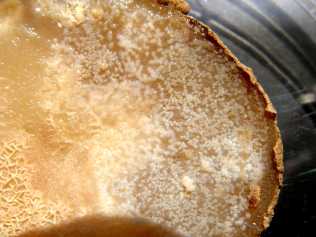 Robert Koch is famous for being the first scientist to conclusively identify the etiological agent of any disease (anthrax in this instance). He established a set of criteria which must be satisfied in order to do this, called “Koch’s Postulates.” They are:

The major challenge in these criteria is to isolate “the putative pathogen” (bacterium) in pure culture. Koch was familiar with the work of Joseph Schroeter, who observed that the surface of a potato slice would develop small colored raised circular spots when left open to the air. Koch reasoned that each of these raised spots must have arisen from a single contaminating cell. As it multiplied, the single cell produced a visible clone of identical cells (a colony) .

He realized that these colonies were pure cultures (clones) of bacteria because each arose from a single cell.

Fortuitously, Bacillus anthracis, the etiological agent of anthrax, was able to grow on potato, and would yield a pure culture by which he was able to satisfy his postulates.

a) Cross reference in your Notebook the protocol you are following.
b) Describe the specimen with which you are going to inoculate your potato.
c) Label your petri dish in small letters ar the edge of the plate:
i) your initials
ii) the date
iii) the specimen being tested.

2) Sterilize a paring knife by dipping into 95% EtOH, shake off the excess, then briefly flame to burn off the alcohol.

3) Slice a cooked potato about 1/4 inch thick and, using tweezers dipped to sterilize in EtOH and flamed to remove excess EtOH, place the slice on the bottom of a sterile petri dish.

4) Inoculate the surface of the potato with a sample of your choice: wipe a finger across it, lick it, swab the floor with a Q tip, sample your nose with a Q tip, (or pick your nose and wash afterwards…), or leave open to the air for several minutes, etc
Place in 37 C incubator

5) Cover the Petri dish and place in the 37°C incubator in your assigned spot according to your seat number.

6) Incubate for 48 hours, and examine the surface of the potato for any growth.

7) Describe the colonies which appear, and, time permitting, smear and stain to see their morphology. Illustrate what it looks like. Then, if you like, take a picture?